or otherwise known as Ancient Anhialo, is an enchanting Black sea town, offering natural and romantic atmosphere. The town is well known for the healing mud of the Pomorie salt lake, as well as the vintage wines, produced in the region.

The town was founded in IV B.C. near the salt lake, called “sacred” by the ancient Thracians, for its healing properties. The wine production is deeply rooted in the history of the region, along with salt production and fishing. As of recently, the town of Pomorie started attracting tourists because of its year round spa and wellness centers.

The weather conditions are extremely favorable: prolonged sun exposure, with up to 2360 hours yearly, with an average July air and water temperature of around 23,6C. The morning air is rich in ozone and negative ions, ultraviolet rays and iodine, released by the sea algae.

The beach strip is about 5 kilometers long and about 30 meters wide. It’s covered with dark sand, which allows for better sun ray absorption, favoring a good tan. The color of the sand is due to the higher quantities of iron and manganese. The sea bed is slightly sloped, which makes it an excellent spot for swimming.

The slow cooling properties of the sea water favor a warm and prolonged autumn. The winter is soft, and snowing is rare. Those weather conditions allow for the operation of the resort from early spring until late autumn, especially for sun and sea therapies. 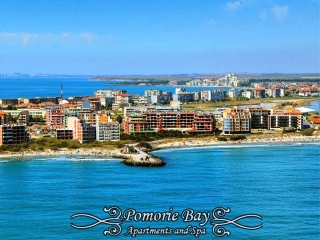 The resort is well known since ancient times – a number of archaeological finds bring evidence to that claim. The lime mud, for which it’s famous, was used during all ages until present days. It’s rich in hydrogen, manganese, chlorine, calcium, sodium and sulfates.

The healing properties of the mineral waters on the territory of the Pomorie municipality have also been known in ancient times. Most of them spring from big depths, which guarantee their purity.

The proximity of the town of Pomorie with two other ancient settlements, proclaimed cultural monuments, the town Nessebar and the town of Sozopol, offer the visitors a chance to experience antiquity, as well as to enjoy the local attractions of the two unique tourist centers.

The more dynamic and modern living tourists can find their own “rhythm” in the most visited Bulgarian Black sea resort, “Sunny Beach”.